The desecration of Ben Chifley's Speech by Rudd!

Ben Chifley would not have been turning in his grave during Kevin Rudd’s triumphal concession speech last week, he would have been spinning like a top! For this man to quote Chifley’s ‘Light on the hill’ speech was the ultimate hypocrisy.  Chifley’s  speech in part says,

‘…it is the duty and responsibility of the community and those more fortunately placed to see that our less fortunate citizens are protected from those shafts of fate which leave them helpless and without hope,…’ I wonder how these words would be taken on and ?

After 35 years of membership I resigned from the Party the night Rudd was re-elected to the Prime Ministership.  For the Labor Party to move forward Rudd needs to do the same.

Perhaps if he does so many of us who have left in disgust lately may rethink our decision.
Posted by Geoff Cooper at 12:28 AM No comments:

Congratulations Mia and Nick on your recent wedding.  Thanks for sharing part of your honeymoon on tour with me last Wednesday.

People, check out www.evergreenwinerytours.com.au and add a winery tour to your special celebration and/or holiday.
Posted by Geoff Cooper at 10:55 PM No comments:

Come on people, spoil your special someone. Take them away for a very special stay on our 'Romantic Getaway' package at 3 Kings or the 'As good as it gets' package at The Gateway at Villa Raedward. Check them out at www.evergreenwineries.com.au
Posted by Geoff Cooper at 12:26 AM No comments:

Launching Evergreen's new "As good as it gets Package"

I have just joined with the stunning 'The Gatehouse at Villa Raedward' apartments to create a top- end accommodation and winery tour package. It includes:

* a sumptuous three course meal with a glass of sparkling wine and petit fours at the Yarra Valley's premier restaurant, Eleanore's at historic Chateau Yering.

* one or two night's accommodation at Villa Raedward

* glass of sparkling wine and chocolates from the Yarra Valley Chocolaterie

Four happy campers; Dan, Rushelle, Lauren and Dani after lunch at Tokar Winery. This can be you. Book on www.evergreenwinerytours.com.au 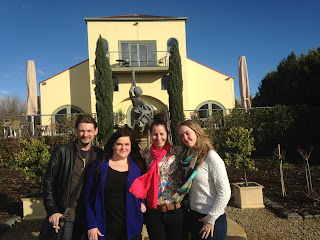 Posted by Geoff Cooper at 9:54 PM No comments:

A chocolate lovers' must see!

Come see the new Chocolaterie in Yarra Glen.  This is a free add on to any full day tour. Book a tour on www.evergreenwinerytours.com.au
Posted by Geoff Cooper at 8:51 PM No comments:

'Downtime Specials" Book a Full Day Tour for four people from the City and waive the $100 transfer fee or book for four from the Yarra Valley and gain a $10 per head discount. Book your tour at: www.evergreenwinerytours.com.au

Posted by Geoff Cooper at 4:19 PM No comments:

Here's a mix of my two lives, freelance writer and winery tour operator

Here's an article on Killara Winery I had published recently. Don't forget to check my website at;  www.evergreenwinerytours.com.au

Most wineries in the have wonderful views but Killara Estate in the lesser frequented southern end of the ‘Valley, arguably has the best. Visitors look down from Killara’s restaurant deck, across the sweeping vineyard to the triple peaks of,  Mounts Toolebewong, Ben Cairn and Donna Buang. However it is not the view that sets this winery apart it is the hospitality shown by the Palazzo family and Cellar Door Manager Kevin  Sheehan.

“La famiglia e tutto”,  roughly translates as family is everything.  This is the essence of   Italian hospitality enjoyed by anyone attending any event that involves this incredibly warm race of people. Consequently, it is also at the very core of Leo and Gina Palazzo’s success in the relatively short time of their operating Killara Estate as a Cellar Door/Restaurant in the .

Killara Estate has an historic background. This delightful property  was a huge holding in the 1880’s. Originally owned by Dame Nellie Melba’s father David Mitchell, and then sold to the legendary Age Newspaper magnate David Syme, it is again becoming a significant asset to the ‘Valley.  The history of modern Killara is intertwined totally with the history of the Palazzo family’s journey to .

For four generations the Palazzo family lived on the land, first in and now in ..  While the Palazzo’s in Italy were of some substance, the southern Italian trait of  ‘Padre ´e padrone’,  Father is father and boss, ensured that Leo’s father and mother came out to Australia with empty pockets. This rather mercenary philosophy  operates on the theory that, while you’re under the family roof all of what the family has is yours, but if you choose to leave then you go with nothing!

After arriving in in 1956 Leo’s father worked for Smorgans in to gain  enough capital to establish a farm in the Riverina near his brother.  After some initial success in NSW growing wheat, grapes and cattle the drought in the 1970’s set them back.  As a five year old Leo has memories of he and his seven year old brother using a .22 rifle to shoot crows to protect the calves. It seems the calves were more at risk from this escapade than the crows.

The drought forced the family back to to enable his father to start over again as a motor mechanic, to raise funds to pay his debts with the intent of returning to . The family returned in 1977. A little luck and sound investments in the property market put the Palazzo family back on their feet and the Patriarch was able to clear his old debts and buy the Killara property.

The property did not have vines at this stage, but it was Leo’s father’s wish to plant them after his Riverina experience. Killara did have cattle which was his first love. At one stage it ran up to 1200 head of Herefords.  The vines were planted in 1986 and the grapes sold to vignerons to make wine for other labels

The family has had its difficult moments.  Leo wanted to produce their own wine but this did not accord with his father’s view of the future.  Leo said,

“It’s almost common knowledge that Southern Italians are hard headed and very strong willed, so when you get two similar personalities clashing, one of them has to accept the way things are or leave, so I left.”

In 1995 Leo bought a small scrap metal and roofing material business in . His accounting background enabled him to build this small business up to the extent that it now operates from a larger premises and manufactures roofing and sheet metal products in its own right.

Gina, Leo’s wife and partner in all respects is English, but she has her own Italian connection.  Her parents named her after the 1960’s Italian actress Gina Lollobrigida. Her father served for many years in the RAF, and it was during a posting to that they met. She has been an integral part in the success of both businesses ever since.

Sadly, it took the untimely passing of Leo’s 36 year old sister Silvia, from Lymphoma, to bring he and his father back together. This enabled the existing winery/restaurant to become a reality. The previous business estrangement from his father was put aside and they both agreed that to progress the brand a more public exposure was required.

Geoff Green, who became Killara’s Restaurant Manager in the formative years, was the driving force behind Leo’s insistence that to proceed to the next level a Cellar Door and Restaurant was necessary.  Ironically again, it was the death of Silvia that led to the beginning of this business relationship. Leo met Geoff at his sister’s funeral he now considers him a family friend and mentor.

Leo’s personal raison d’etra for the restaurant is very Italian,

“I wanted to establish something where people can just come together and be happy. It sounds a little weird but we just wanted people to be an extension of our family and to have people come in and do what we do. Eat, drink and forget about life. It’s really humbling when you stand behind the bar and watch 160 people sharing our place. Recently we had people from Frankston and Werribee South and I asked myself, how do they come to be here?

“One thing we have done and I consciously want to continue, is to demystify this whole wine caper. I want people to be completely at ease while drinking our wine. I tell visitors  not to be too concerned about matching wine and food but to ensure that the company they bring with them is worthy of their own, and then worry about the wine.”

Leo is a hands on owner and works with winemakers, Mac Forbes and Travis Bush to ensure Killara wines are, “…alluring and pleasantly aromatic.  People need to want to get it to their mouth. I don’t want to have to be abstract with my descriptors.”

The current restaurant site was originally a milking shed set on 140 acres. Despite it being just up the road from Killara, because the property had been poorly advertised Leo and his family had no idea it was coming on the market. He thanks Wally and

Judy Zuk owners of  Five Oaks winery for his family purchasing the property  He was advised by Wally that it was being auctioned in ten days time, and realizing it was in the ideal position to fulfill their dream they made an offer. No one bid at the auction and the offer was accepted. The new Killara  was a reality.

Killara’s entry level wine carries the ‘Racers and Rascals’ label. This is another historic aspect of the property. In 1946 the Victorian Vintage Car Club held an annual car rally on the then 10,000 acre property. It included a time trial through a straight oak lined quarter mile driveway. The Club produced a written history of their club called, ‘Racers and Rascals. This little piece of motoring history has held good to this day as the Austin Healey, Alfa Romeo and Jaguar Clubs use Killara as a destination quite regularly for their Club rally days.

Killara has plans for the immediate future.  A large area of vines in front of the restaurant has been cleared for law and a large pavilion is to be built on it. The focus being on vintage car clubs so that they have a venue to come to Killara on their Club days where their cars can be on display to the public. Leo sees this as an extension of where it all started, “La famiglia e tutto”.

Posted by Geoff Cooper at 7:30 PM No comments: 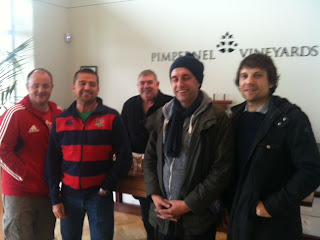 Lions Rugby fans doing a tasting at Pimpernel Winery prior to the big match.
Posted by Geoff Cooper at 7:12 PM No comments:

New website for Evergreen Winery Tours my other business.

Check out my updated website for my Yarra Valley winery tours company Evergreen. Thanks to Paradigm$ for their work on the new site.  See it at:  www.evergreenwinerytours.com.au Keep posted for winery tour specials
Posted by Geoff Cooper at 7:06 PM No comments:

Geoff Cooper
Have you ever thought of giving your wife, husband, child, grandchild or even workmate a personalised poem as a gift? Here's your chance. Contact me at geoffgcooper@bigpond.com (Writer's Block) and I will send you a pro-forma to help me create a personal poem for someone who matters to you. $100 for four stanzas and $25 for each additional verse. $50 non-refundable deposit required at booking. Payment by Visa/Mastercard or electronic transfer. Receipt provided.